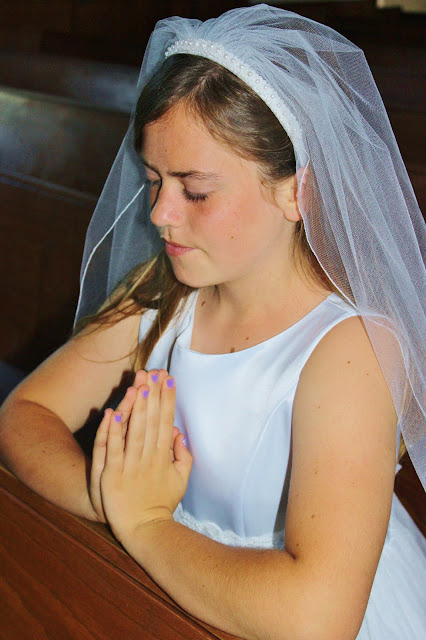 Making a 1st Communion party special is pretty easy to do.  It takes a little planning but everyone can do it.  To see the other posts about this party go here and here.

I knew I wanted to capture this photo.  However, in order to do so, I would have to be right next to Trinity as she knelled down to pray.  Hopefully, she would have closed her eyes and folded her hands just like this.

Rather then risk missing out on this photo, I made sure to get to the church early in order to have her knell down and let me take this picture.

I got so many compliments on this shot.  All the other parents were sad they didn't get their child in this pose. 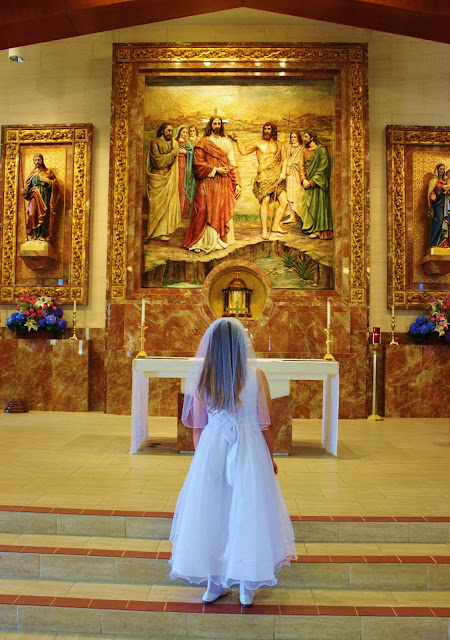 I also wanted to capture her as she walked up to the alter and looked up at the large picture in back of the alter.

This would NEVER have happened during the ceremony.  So again, I was happy I remembered to do this before the service started.

Think about the types of photos you want and get them before or after the ceremony.  That way you will be able to relax and enjoy the service without the worry of taking photos. 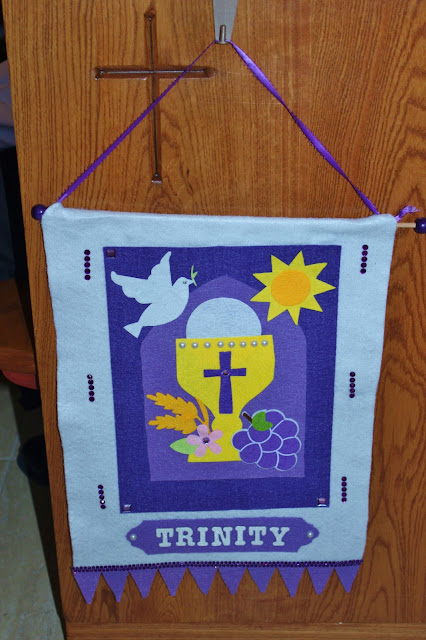 The banner also was made so that it tied into her "Purple Bling" party a little bit.  Rather then getting a kit and making it look like every other banner, her banner was done in the purple color of her party and also had some of the "bling" added to it with rhinestones and glitter letters spelling out her name.

It really stood out from the other banners at the church. 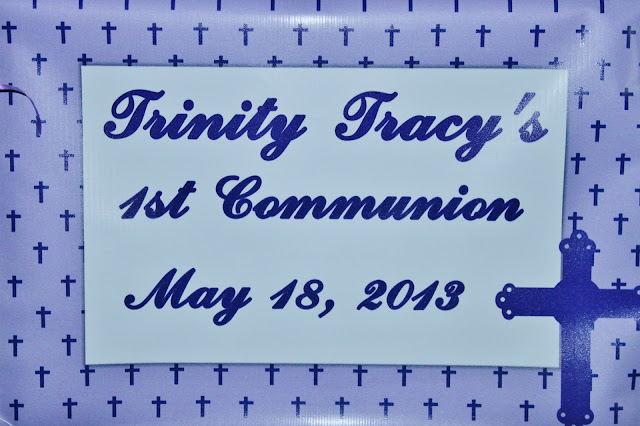 We asked her where she wanted to have her party.  The only place she wanted to be was at my house.  Even though we felt it was going to be crowded there, we made it happen for her.

To greet everyone, we had this sign made and it was in the front yard with purple balloons attached to it so everyone knew which house the party was at.

Again, we used the color of her party to tie it in with everything. 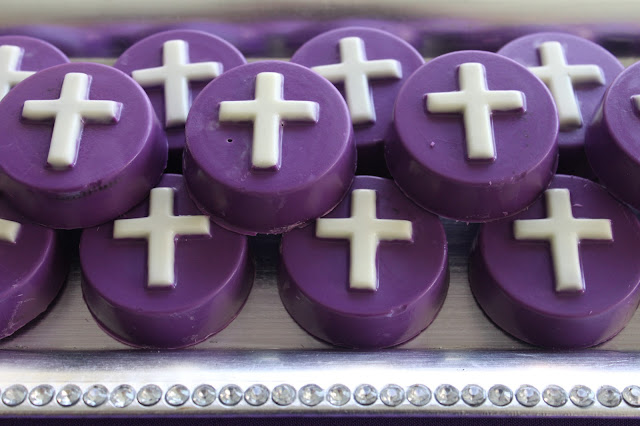 Even though the food wasn't going to be in the color of the party since there really isn't to many foods that are purple, I wanted to have something purple.

The easy way to go was to not worry about the main food and just stick with the desserts.

One thing was the chocolate covered Oreo cookies.  I used purple colored chocolate for the party color and a cross to bring in the 1st Communion party.  Also, they were on a dish with rhinestones to add in the bling of the party. 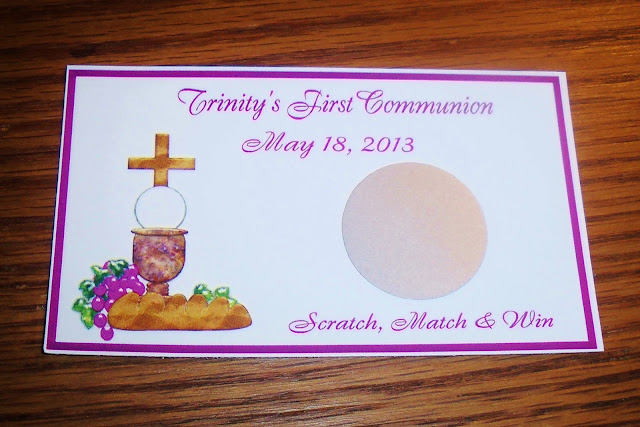 For another personal touch I ordered these "lottery" tickets.  They were the theme and color of the party and also had Trinity's name on them.

They also made everyone feel like they were brought into the party and got to have some excitement with the hope of winning.  Rather then giving money like a real lottery ticket, we gave away gift cards. 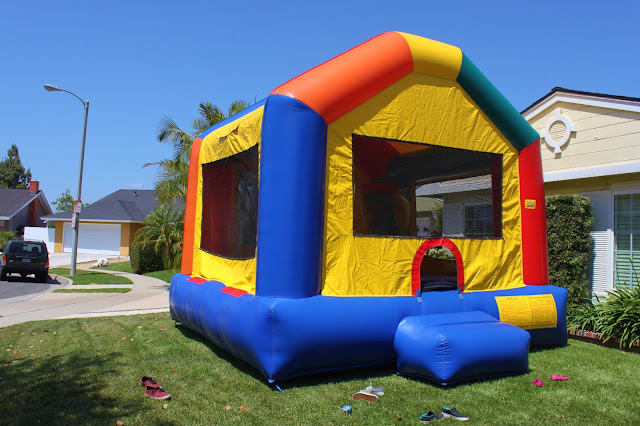 We got a bounce house so kids could have fun and burn off some energy from all the sugar from the candy bar we had.

Even the bigger kids had a blast in here.

While it didn't really go with the theme of the party at all, it turned out to be a big hit in order to keep the kids happy and allow the adults to enjoy the party more. 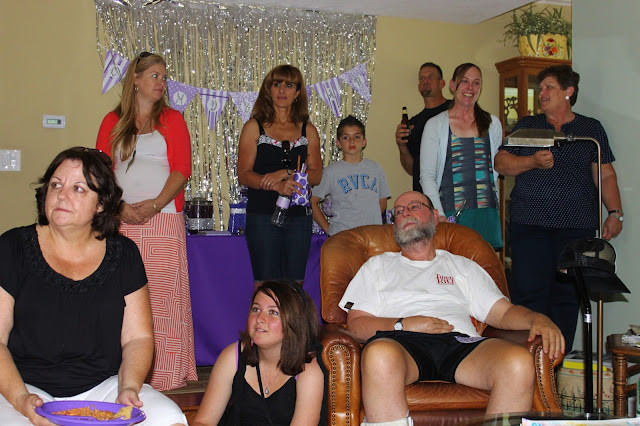 My brother put together a DVD of Trinity throughout the years.  It was set to music and the photos had most of guests in them.  That way, not only did everyone like seeing Trinity grow up over they years but they got to see themselves too.  After all, everyone loves to see themselves, even if they say they don't.

This was the biggest way we were able to make this party super personal.  It showed so many memories and everyone loved this so much, they asked to watch it a 2nd time. 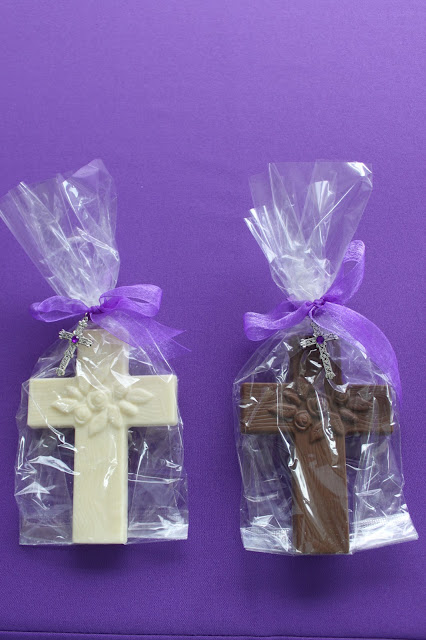 Sending everyone home with a little party favor to remember the great day is also a great tip.  Not only did the guest at this party get some yummy candy, they also got a cross charm to keep as a memory.  They could put it in a scrapbook, they could wear it as a necklace, they could put it on a charm bracelet, or just keep it as a reminder of the special day they shared with Trinity. 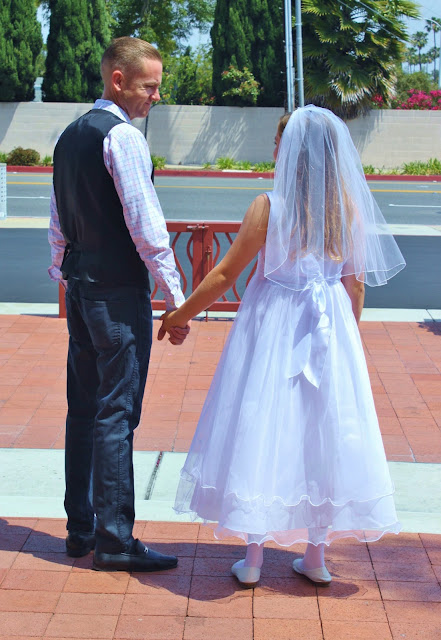 But the most important and best way to make your loved ones 1st Communion day special is to slow down a little bit, take a minute to spend some together to reflect on the day and it's meaning.

Here Trinity is with her Daddy.  It's one of my favorite pictures.  One she will always be able to look back on and remember that little special talk and smile she shared with her Daddy on her special day.