SPENDING THE DAY IN SANTA BARBARA 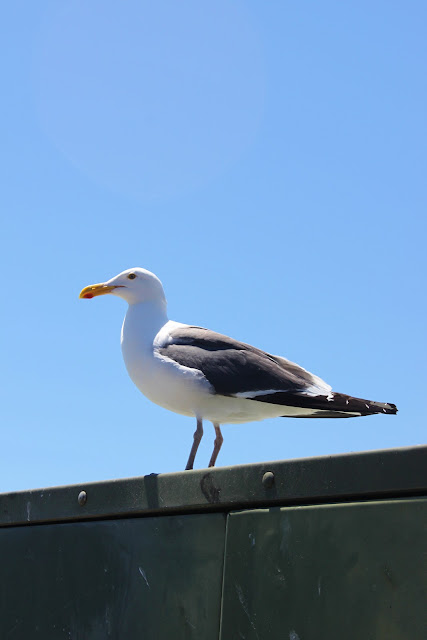 I thought it would be fun to spend a day alone with my great niece, Trinity.  So, we got ready early in the morning and took off to Santa Barbara.

It was a beautiful day out.  The sun was shinning.  The sky was blue and while it was nice and warm it was in no way hot.  Just perfect. 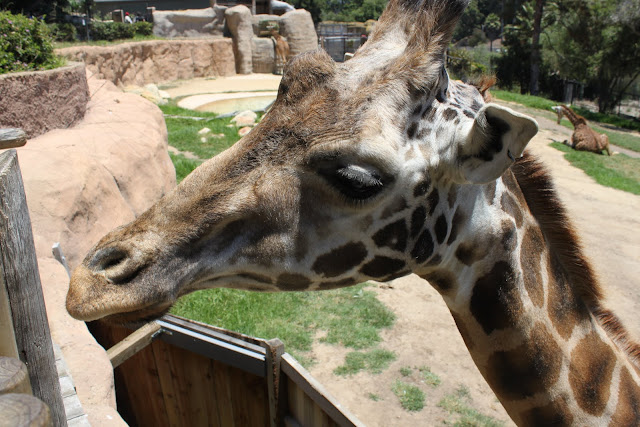 It took us about 2 hours to get there.  We only made one stop before we got to where we were going, The Zoo.

We decided to have lunch before we got there so we wouldn't have to take time away from the animals. 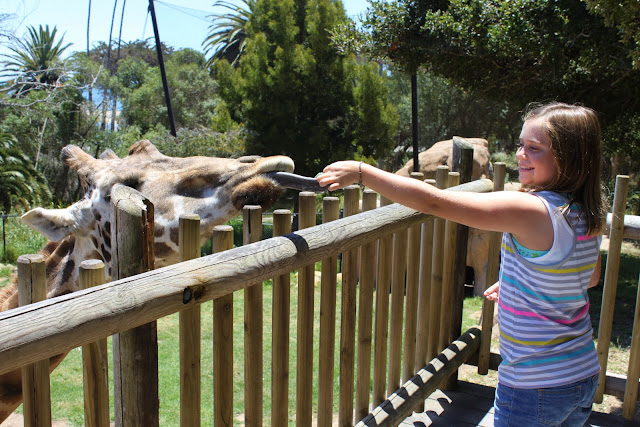 I had never been to the Zoo in Santa Barbara before.  It was very pretty.  Plus, you can feed the giraffes.

I had never fed a giraffe before.  Have you?  Did you know they have a  super long tongue that curl up to take the food.  Plus their tongues are like sand paper! 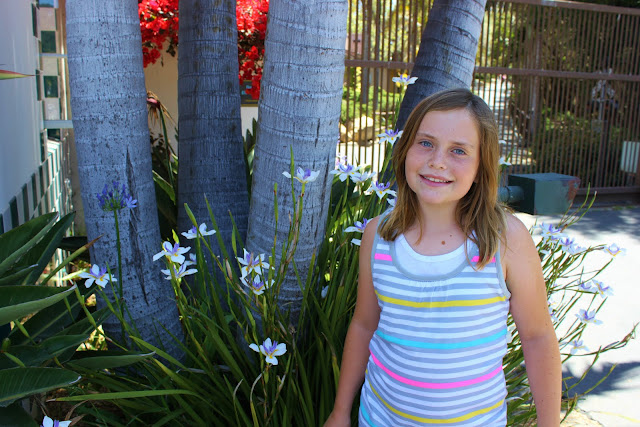 The Zoo was set out really nice.   It was easy to find our way around.  Not like the San Diego Zoo that is so big you get lost.

It was a very pretty zoo too.  Lots of trees, flowers and grass areas.  It also sits up on a little hill so it over looks the Ocean. 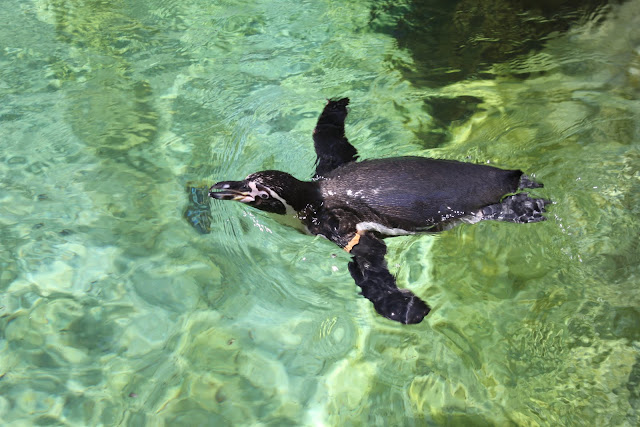 They also allowed you to get pretty close to the animals.

We couldn't decide which ones were our favorite.  We loved them all. 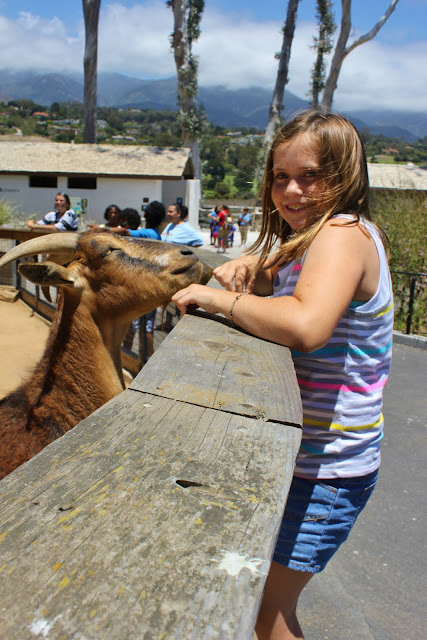 After several hours we had our fill of the Zoo and decided to move on.  We were not sure what we were going to do but sat out to explore the city. 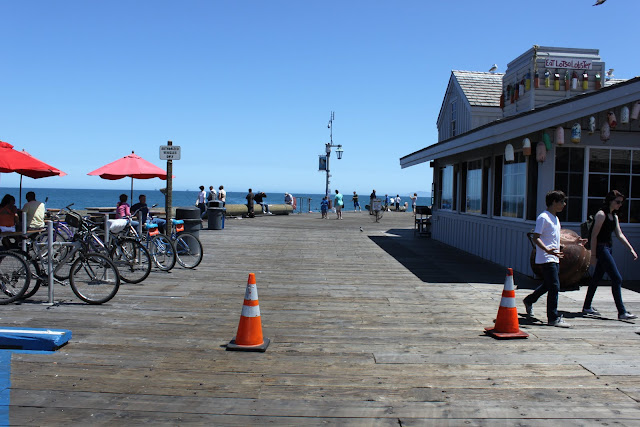 We ended up going to the Wharf.  It's like a long pier but there are shops and restaurants.  Plus, you can actually drive all the way out on it. 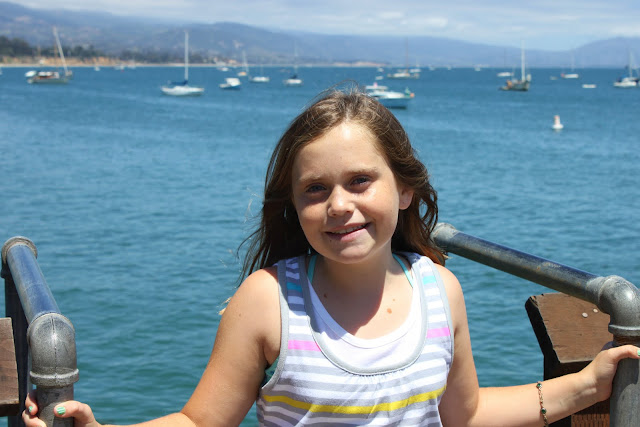 We parked and walked around.  We admired the beautiful color of the Ocean water.

Trinity really wanted to go in the water and swim.  But, we didn't bring her bathing suit or even a towel.

We went into all the shops on the Wharf but they didn't have one bathing suit.  So, we drove around State Street (which has lots of shops).

The bathing suits were so expensive that I couldn't justify buying them.  She had about a dozen suits at home already. 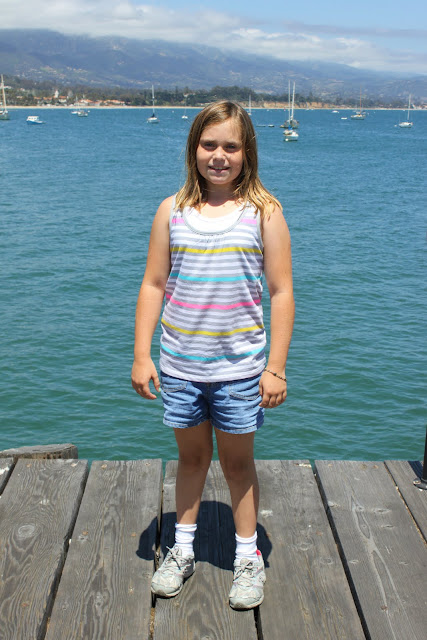 She was really sad she was not going to get to swim.  She asked if she could just go in with her shorts on.  I told her that she could but then we would have head home after she went swimming because she couldn't go in places all wet.

She thought about it for about 2 seconds and decided she would rather go swimming then go any other place.

So, down to the beach we went.  She went swimming for about 1 1/2 hours.  We collected some shells and she had a blast!

When it was time to go home, we were getting hungry.  We drove for about an hour and then pulled over to get dinner at a drive thru.  We just were going to eat in the car while we were driving home.

We ate, told stories of years gone by, sang songs and had a lot of laughs.  Before we knew it, we were home.

We had so much fun that she didn't want to go home.  So she spent the night.

It's always nice to get away and just spend time with those we love.  We had a great day.  I'm so lucky  to have her in my life.  I love her very much!

Posted by Joanne Kennedy at 7:07 PM

Joanne, I think it is so wonderful that you and Trinity share such a special bond. It sounds like a fantastic day. I love that she got her spontaneous swim time in her clothes. She will always remember that day for sure! Hope you are having a wonderful summer :) Happy 4th of July!
Donna

You should do a sleepover at the zoo with your GS troop. We did it when we were Brownies and had a blast!
Nice to see you are having a busy summer with your troop! You look like a fabulous leader and they are so lucky to have you!