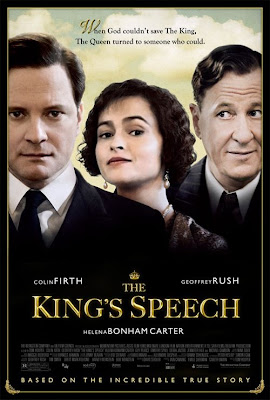 I love to go to the movies. I see a lot of them. I think that makes me just as qualified as the movie reviewers that write for the news papers and have TV shows. Don't you think?

After all, they just give their opinions as to if they liked the movie or not. I mean really, how many times have the critics hated a movie and then you see it and love it. Or, they go on and on about what a great movie it was and it should be up for an Oscar, yet, when you see it you hate it.

So, I thought I would be my very own movie critic that writes for my blog.

My first movie of the year was seen today. The following is my own opinion of movie. My "review".

This movie is based on the true story of, Britain's, King George VI.

Colin Firth gives a splendid performance as King George VI, who is also known as Bertie to his family. Bertie is 2nd in line to become the King after his father King George V.

Bertie grew up with a speech impediment. For as long as he can remember he has stuttered. His whole life he has been teased, yelled at and made to feel inferior to others because of it.

Bertie's wife, Elizabeth, seeks out help for her husband and arranges for him to meet up with a speech therapist, played by Geoffrey Rush.

While the two seem to get off to a rough start, they soon become close friends and we learn the reasons why Bertie stutters.

However, King Edward VIII soon steps down due to the fact that he is in love with a married woman who has been divorced once before and is set to get another divorce and marry King Edward VIII.

Of course this goes against the Monarchy's rules and King Edward VIII claims he would rather be with the woman he loves then to be King without her.

Bertie becomes King George VI and with the help of his friend and wife (who becomes The Queen Mother) gives one of the most important speeches any King must give.

I believe there couldn't have been a better cast to play these parts. Each actor fits the part perfectly.

I found this to be a very enjoyable film and believe that this could actually be a movie that receives many Oscar nominations.

I highly recommend this movie. The only warning I would give is that there some adult language in this movie.