IS THIS HAPPENING TO ANYONE ELSE? 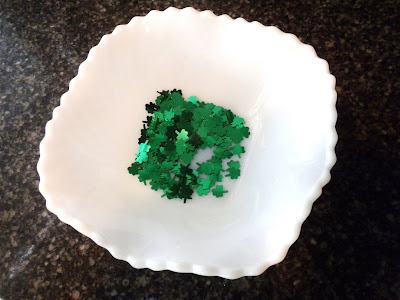 For the past few days I've been finding these little guys all over the house! I have no idea where they came from or how they keep ending up every where I look. 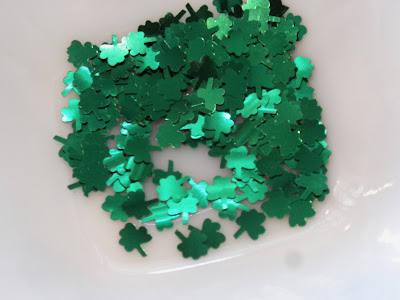 Here, can you see them better now? They are little shinny shamrocks.
Other strange things have been going on here too. The dogs keep barking and running around like they are chasing a ghost or something. There is nothing there when I look.
I have also been hearing little giggle noises coming from different areas in the house.
I started to think I was losing my mind. Really, it was freaking me out. 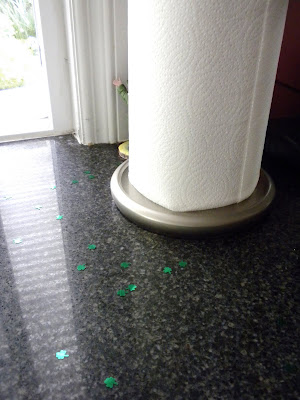 This is what I found this morning as I was going to grab a paper towel from the kitchen.
I ran and got my camera (you know how I love a good ghost hunt and you never know what you will find). Then I slowly walked up and took a peek behind the paper towels. I saw a little hand.

Come on! I was not seeing things...or was I? 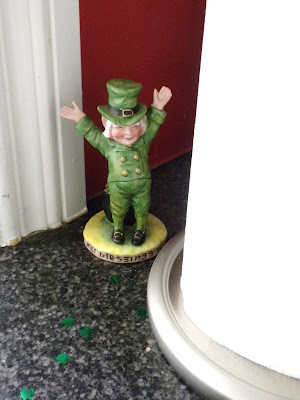 So I moved closer and there he was! A little Leprechaun with a big smile.
I went to grab him so I could collect my pot of gold but he went away faster then I could I get him. 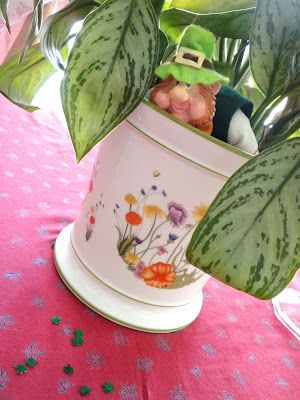 More tiny laughter came from the dinning room table. I went over and there was that shinny shamrock stuff.
I could not find anything at first. Then I saw his orange hair and green hat. He looks different but still I could tell he was a Leprechaun.
Again, he was faster then I was and he got away. Darn! No gold for me. 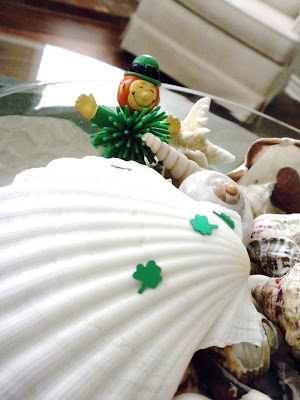 We have a bowl of shells sitting out in the living room and the green shamrocks stood out on the white shells. So I went digging around and low and behold, there was another tiny Leprechaun.
He saw me coming and ran away before I got close enough to grab him. Boy those guys are fast! 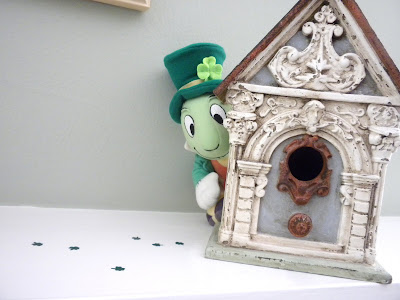 Then I heard singing over by the fireplace mantel. "When you wish upon a star...".

As I searched I saw...A LEPRACAN! Wait! That's not a Leprechaun. That's Jiminy Cricket. What are you doing there Jiminy?
He said he was just trying to get in on the fun. He loves St. Patrick's Day and of course green is his favorite color.
I sent him back to Disneyland. I thought the kids may be looking for him. Besides, I was on a mission. I was hunting for Leprechauns. I want that gold! 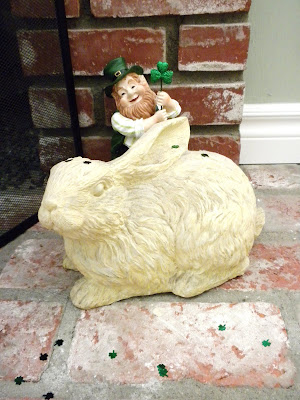 Then I looked down. At the base of the fireplace I saw more shamrocks. Oh look, right behind the bunny. A darling little Leprechaun.

Before I bent down I asked him what he was doing. He said he was scattering shamrocks to bring me good luck.
I told him if they worked I would be lucky enough to catch him and then I would have a pot of gold. All that money. Oh yes. I would be lucky alright.
He told me, as long as I have friends and family that love me then I am very lucky. That all the money in the world couldn't buy me that kind of luck.
I guess he is right. But I wanted to know for sure. So I bent down and quickly grabbed for him. I missed.
OK I know that was bad, but I really wanted to see for myself what owning all that gold would really be like. I guess I'll never know because those little guys are just to quick to grab. 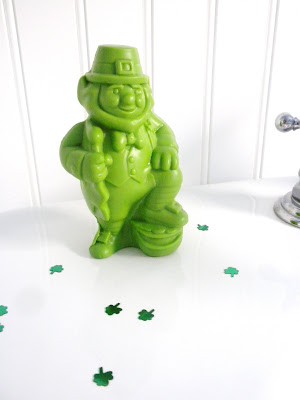 I went to go wash my hands and I couldn't believe my eyes. The soap had even turned into a Leprechaun! This was just to much for me to take and I ran out of there.
I still hear the little giggles. I don't think they have left yet. What is going on here?
So tell me, are Leprechauns real or am really just losing my mind?

I think they are real because the more I thought about it, I knew I was very very lucky. I have a great family and friends that I love and enjoy more then anything money could buy.

Sure it would have been nice to get that pot of gold but I know I don't need it. I have everything I really need already.

Posted by Joanne Kennedy at 3:13 PM

That was great! I hope they leave you a little gold, or at least a winning lottery ticket so you can buy some more table things!
I loved that post, J!

It's the leprechauns that seem to plague us every year 'bout this time, sweetpea! Very bad, very bad!! LOL
xoxo,
Connie

I think the leprecauns are playing a trick on you this year!!! Maybe you can find their pot of gold. Good luck! Love & blessings from NC!

How cute is this?! My bookclub, "The Flamingo Ladies" subsidiary--"Flamingo Cocktail Club" is having a leprechaun party this Friday.

this is just the cutest post i've read in a while!

i'm thinking the one guy IS a leprechaun wearing a "jimmy the cricket" costume. *big wink*

Well if you get ahold of the little guy, don't forget to share the gold.

Publishers Clearing House hasn't made me their winner, so I need a pot of the shinny stuff.

Your so funny. The dogs were probably barking at you, thinking she's really nuts now.