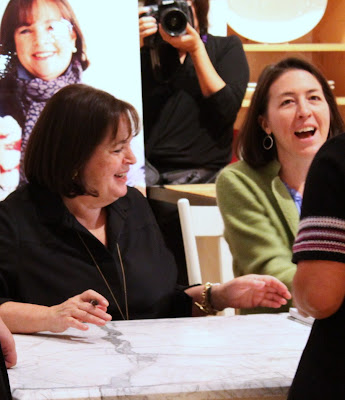 Once again, Williams Sonoma was having a book signing today. It was Ina Garten or better known as The Barefoot Contessa!

I was so excited because I really love her show and have all of her cookbooks. 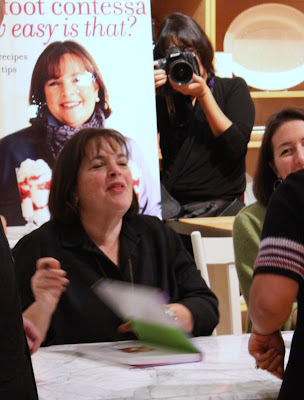 I have been to several book signings at William Sonoma and they have all been the same. You get there hours early and wait. Then the line starts to move and the excitement builds. Slowly you make your way to the front of the line and then you hand your book over.

They ask you who you would like to personalize the book to and you hand over your camera so you can get a picture with the author.

You only get a short time with the author but still it is enough time to say hi, tell them how much you admire them and have them thank you for coming and buying their book. 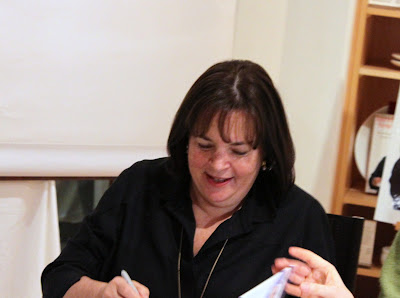 Well, that wasn't how Ina Garten does things!

She would NOT personalize any book. She signed her name and that was it! She would NOT take a photo with you. You could have them click a picture of you standing there but since you couldn't stand very close to her, you would not get a good photo.

Plus she wouldn't look up. She just kept her head down, signed the book and took the next one. 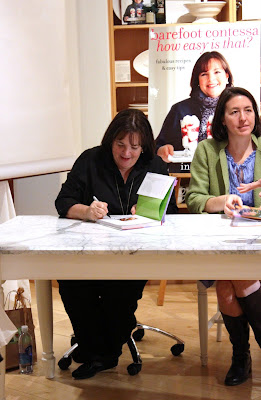 I had four books that I had her sign. They cost $35.00 each. Yet you could buy them at Costco or Target for less then 1/2 that cost.

To me, it was worth it to get her to personalize the books so I could give them as gifts to my friends that enjoy her show. Little did I know she was going to be so rude.

You would think that with paying the extra cost and waiting for hours she would at least say thank you to her fans.

I know this was not how Williams Sonoma normally handles the book signings so, it has to be Ina Garten that set the rules.

She didn't even have as many people in line as some of the other signings I've been to, so I couldn't even write it off as maybe it was because there were so many people.

I lost a lot of my admiration for her today. I wish I would have just purchased my books some place else....if at all.

Yes, it was a BIG disappointment today. Oh well, at least I got a few gifts.

Posted by Joanne Kennedy at 3:29 PM

That is a BIG disappointment!Being such a good fan you deserved better. It is the fans that make for their success and sometimes that success goes to their head. Blessings, L J

So sorry to hear that! You would think she would have a little appreciation since you shelled out a lot of money for her book, drove down, waited in line and no "thank you". That's terrible. I will never look at her cookbooks the same again.

That is too bad! I have seen her when she had her store here, and a guy who is on her show a lot is my neighbor,
That book got really bad reviews on Amazon. Did you see them?

That is too bad. I would have thought that Ina would have been more personable. I hate that for all those people like you who waited in line and paid lots of money for her new book. Oh well, at least you got your books signed. Love & blessings from NC!

Uggg! What a downer, now I have a different image of her...not as humble as I might have thought! Just sell the books on Ebay now ;-)

Your post title says it all! When celebrities from any field put themselves in the public eye for publicity to sell their book, clothing line, latest movie, or whatever — they should be available to their fans. That is the nature of the business. Their private lives should be private, but giving back to your fans in a public arena is how they build their reputation. Sounds like Ina needs a refresher course in PR 101.

Sorry you had such a negative experience.

Joanne, this is so funny! You know, Ina got her big break with Martha. About 15 years ago I saw M. speak, followed by a book signing. (We paid a lot of $$ to see her speak, but it was a fundraiser.) We were then given a speech by the agent, who said to pick ONE book, which would be signed but NOT personalized, and that she would not engage in discussion in order to keep the line moving! Well, of course I had a little chat with her, and she was personable, but the agent kept that line moving like we were cattle! I have met authors of all types at book signings--it is so interesting to see how they handle their fame. How was the book, by the way? I had it on my wish list at Amazon but someone told me it was not new--just the collection of prior books. Linda

I'm so sorry you had such a negative experience. It's 100% different from others I've heard. Ina talked to one friend for so long the staff had to remind her about others in line. Pictures were taken, thanks said, etc. And this happened at more than one signing. I wonder what happened. Whatever it was, it sounds so unlike the Ina my friends have met.

Hmmmmm, maybe she was having a bad day??? Still, I think that when someone does a book signing, they should remember who butters their bread. That's a shame that you had such a bad experience.

Joanne, my daughter (Mary Loves Tea) was treated badly by Martha Stewart and was embarrassed and disappointed in her Idol. My advice to those who are famous is "Be careful. You never know who you are speaking to..or NOT speaking to..or snubbing, or being downright rude to!"
I also have been rather a fan of "The Barefoot Contessa" and I am embarrassed for her! What a way to behave. I would expect one to be personable at a book signing even more so than on TV. But..hey, that's just me!
Hugs to you, Joanne~! You are one of my most favorite people.
Mona